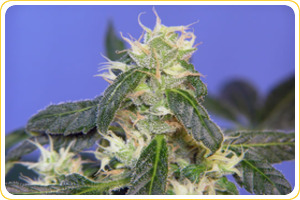 Cannabissearch.com Buzz Rating: B-Bud inspires a clear-thinking effect, with upbeat, positive feelings for around a half-hour to 45 minutes. The comedown is more of a 50/50 balance between cerebral and body effects and can result in sleep in less experienced users.

B-Bud was created using Dutch Passion’s Blueberry strain as a mother, that was then pollinated by a Burmese landrace variety. The result is a mostly sativa strain that has all the makings of such. Flavors of sharp citrus, exotic flowers and tropical fruit make up the palate of B-Bud. The potency is average to above average, and would be great for a wake-n-bake or nearly any time of day for users with lower tolerances. The buds are long and wispy with moderate trichomes numbers and very long, electric-orange pistils that give this bud excellent bag appeal.

Despite being mostly sativa, B-Bud flowers for an incredibly brief period of time. Indoors she’ll be ready for harvest after just six or eight weeks of flowering, while her outdoor counterparts should be ready sometime in September. When cultivated indoors, B-Bud can be vegetated up to four weeks. There are two distinct phenotypes that are seen with this strain. The first is a mostly sativa pheno, with darker, slightly broader leaves. This is the most common pheno. The second resembles a pure sativa or Haze variety, with a far taller structure, thinner leaves that are light green. The second pheno usually takes around eight weeks to flower and is only seen roughly 25% of the time. Yields are low to average in both phenotypes, being around three to four ounces, indoors. Outdoors can be much bigger, depending on how these ladies are cultivated. It is best to feed them low nutrient levels, as they are prone to nutrient burn.

Cannabissearch.com Buzz Rating: The initial effect is a rushing, cerebral one, that becomes a powerful and somewhat sedating body high, after around ten minutes. While it’s not a couch-lock type of high for most patients, it certain can be for inexperienced ones.

Surprisingly for an auto-flowering Type, Auto Northern Hog boasts large, dense buds. These buds are caked with layers upon layers of sticky trichomes, resulting in a THC content of up to 17%. Such a high percentage of THC is unheard of in ruderalis crosses. Cultivating this strain can easily be done by both novice and experienced growers. These ladies are incredibly stable and vigorous. They also have a great resistance to mold and mildew. Growers will find that in temperate areas of the world, they can harvest up to three rounds of these ladies in a single growing season. Yields have shown to be average, at best. 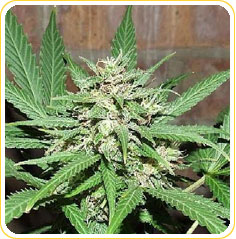 The Automatic marijuana strain combines Mexican Ruderalis with Northern Lights and then crosses the resulting strain with pollen from a Bonkers male. Specifically, she is 50% Indica, 30% Sativa and 20% Ruderalis. She grows bushy and stays short; perfect for a Sea of Green indoor cultivation setup. She requires very little attention, or even knowledge, from the gardener and practically grows herself. In fact, experts agree that she is one of the easiest medicinal cannabis strains to grow, period. Big Buddha asserts that Automatic is the next generation auto-flowering strain, and one that continues to make worldwide fans out of all cannabis connoisseurs who experience her delights.

Automatic marijuana offers scents of lavender flowers and a cotton candy/tart taste. She presents loads of flavor and aroma that is sure to please. She also works it out where it counts most: in your bodily systems! Her buzz attacks your senses very quickly, and very potently. A pleasant, yet powerful high will set in and allow you to transcend pain, depression and so much more.

Automatic cannabis plants grow vigorously and are a very stable strain to cultivate. You’ll notice little variation between phenos and will enjoy getting her set up in your grow system, setting back and letting her do all the work! She is truly a pleasure to work with and makes you feel that you’re doing everything just right. Enjoy your experience cultivating Automatic medical-grade cannabis in your home. After all, it’s legal now in 14 states plus Washington, DC. 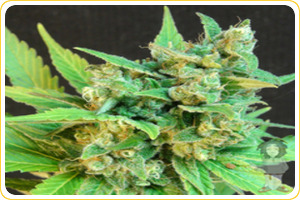 Cannabissearch.com Buzz Rating: While the potency of B. Lee is nothing to write home about, this ruderalis variety provides an exceptionally psychedelic effect that gradually transitions into a mild body high. The total high lasts around a 20 or 30 minutes.

The breeder hasn’t released the exact genetics of the ruderalis that was used to breed with Citrus, but whatever strain they chose made B. Lee an above average all-around strain. These nugs are actually pretty frost but can be somewhat airy. They are elongated slightly in shape and have long yellow or light-orange pistils. The flavor is one of the best characteristics of B. Lee, being reminiscent of walking down the middle of a lemon tree orchard. Very citrusy and slightly earthy.

As with all ruderalis strains there is no veg time when you add B. Lee to your garden. It will automatically begin flowering. The breeder recommends keeping these ladies on a 18 or 20 hour light schedule, continuously throughout the grow. This is a very low producer and is really only used commercially when grown in a Sea of Green. Typically each plant will produce anywhere from 3/4 oz. to 1 oz. at the very maximum. Due to the short growth period, these ladies rarely get over 2 feet in height, which makes them a good candidate for a stealth grow or, like the aforementioned Sea of Green. In most regions of the world it’s okay to plant these ladies outdoors anywhere from April to the very beginning of September.